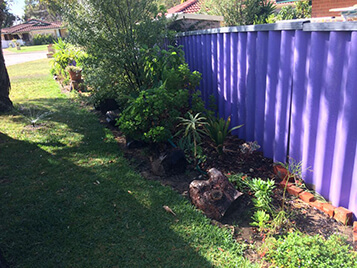 My customer Joel called stating the sprinklers on station 1 were not coming on for more than a few seconds at a time. This can be either a faulty control box, a bore pump relay or pump, but most likely an issue with a solenoid valve. Arriving on site I tested the box – seemed ok. He had no idea where the valves were so I used the electro-magnetic equipment in the area I guessed they were likely to be installed and there they were. Great! Upon testing number 1 station directly it was found the Irritrol solenoid (valve actuator) was faulty and was replaced. A very smooth job. The customer was happy to maintain his own sprinklers. Another successful reticulation repair.

We cover all areas North to Butler and South including around Mandurah. We also now offer a quarterly maintenance schedule at just $120